Life On The Ranch

“Before I began raising little North American Shepherds (aka mini aussies) I was first a mom of 3 children. I was very active in their lives and my husband and I went all out to make sure they were socialized properly (LOL) too. My boys received many football awards to include football captain and my daughter was a great horse trainer at the ranch and at the very very large high school she attended was cheerleading captain 3 of the 4 years she was on the squad….elected by her peers. They were all 3 honor students and the love of our life. We worked hard to make sure they had all the tools we could provide for them to be successful. Major age 25 (my oldest son) has graduated from the 5 year engineering program at the University and employed now. Blake is 21 and is studying to be a high school math teacher and football coach and my daughter is following in her older brother’s footsteps studying to be an engineer like him. When you are a parent as involved as I was you fear empty nest! So, I decided to raise “fur children” for the rest of my life. I obviously knew how to “socialize” human children so simply used my God given tools in a different way to raise lovely “socialized” fur children! You will see my daughter in many of the pictures I use on the website and often she is in her farm clothes so thought you might enjoy seeing her all dressed up! My boys are total jocks and aren’t about dressing up so the pictures I chose of them are totally typical of their lifestyle outside work/school. The first picture of the boys is of them at the Florida Keys this past summer and then my daughter’s picture is below. 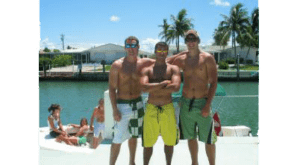 My son Major on the left, Huggy (Blake’s best friend in the middle) and my youngest son Blake on the far right. My daughter Teal is in the black shorts on the boat but her dress up picture is below. 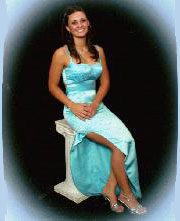 Here, the pups are playing wildly: 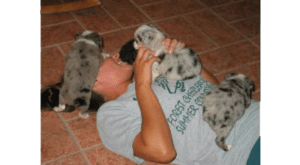 SHHHHHHH They played until they dropped. 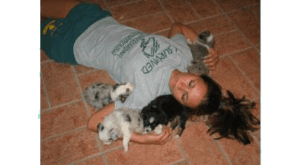 The guys are wrestling again. 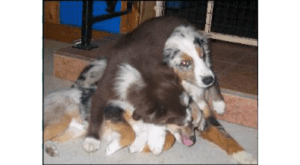 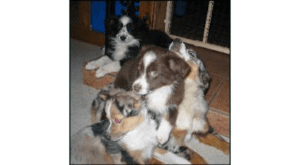 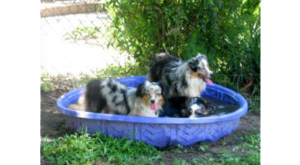 Life on the ranch on a hot summer day. Three toy males in the pool together. They are starting on the left….Awesome (Cujo son), Top Gun (Rimfire male under water in the picture) and Magnum (in the rear out of Calvary’s Hunter Bear and Catherine). 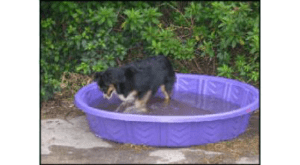 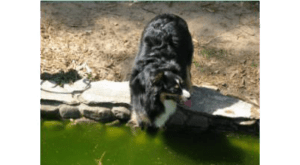 Ebony cooling off in the pond on a hot summer day. 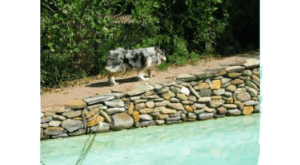 Typical scene at City Slickers where an Aussie is racing for the waterfall spot by the pool. 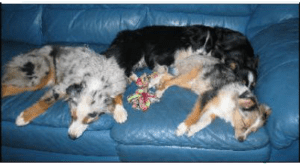 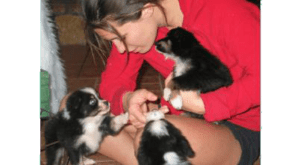 But all of this love is worth it! 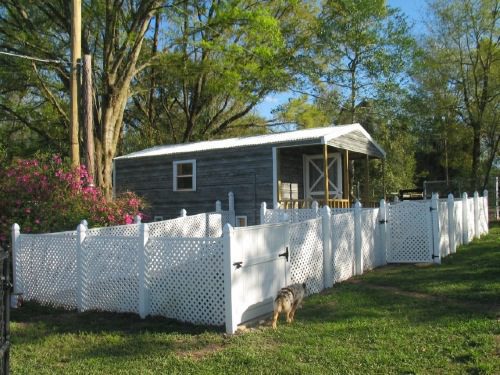 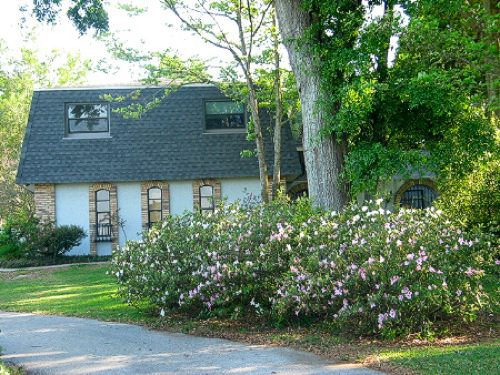 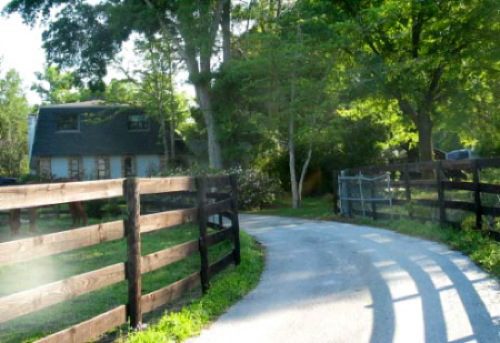 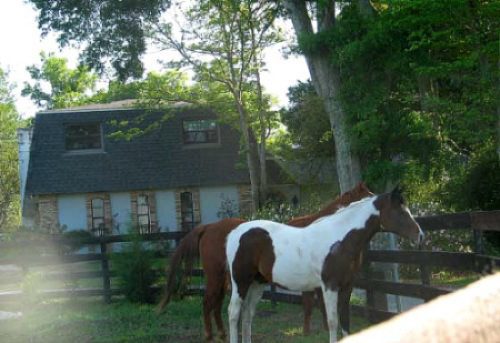 “Vanna White is our sweet German Shepherd that was spayed a 6 months old. She is the nanny to pups that come to City Slickers from all over the Country. Whenever a young male goes through his juvenile delinquency period of his “teen years” at about a year old he would get to go live with Vanna a few days. We never knew how she did it but she could turn them into angels in a day. So, the day Samson woke up and decided he wanted to be a bad boy he too was turned in with Vanna. My daughter grabbed the camera and took pictures as Vanna began working with him. She said he ran up to Vanna White and began pouncing on her as if she was a pillow and immediately she took control of the young brat. These pictures are the sequence of PROPER TRAINING of a young fur boy by his doggy nanny THAT WORKS EVERY TIME!! 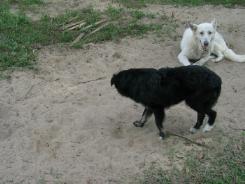 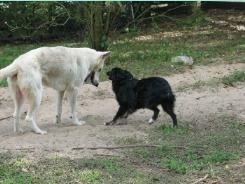 “Do you really want to challenge a mouth this size?” 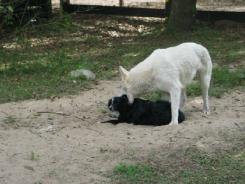 “Big Boy you get up when you quit wiggling” 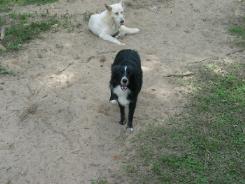 “You aren’t fooling me, I know you are wisely sneaking off to take a pretend nap” 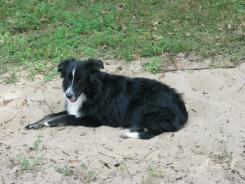 You can tell by Samson’s expression when he collapsed in the sand that he is one of the most embarrassed/humiliated little aussies (Royal Basque Shepherds) at City Slickers that day. I am so thankful to Vanna because Samson returned to our “GOOD CHILD” status that day and never back slid again. 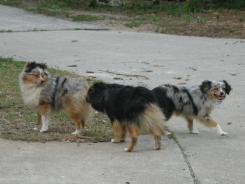 Nite had decided he was brave enough to check his Dad Cujo’s rear out. You can see the distain in Cujo’s face as he looks back at his son but the next pic shows Cujo’s reaction. 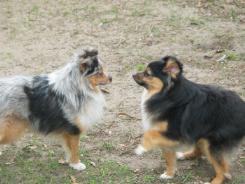 Cujo let Nite know he will never be old enough to check his father’s anatomy out. 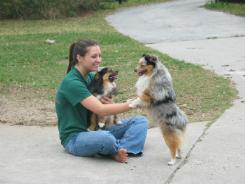 Then after Cujo had a long stare at Nite he dove into my daughter’s lap to be saved from his father. Free entertainment at City Slickers. Notice how Nite is taunting his father from a SAFE lap.

Molly’s dad brought her back to the ranch to adopt her a little brother. Molly is such a city girl all fluffy and perfect. She wasn’t sure about claiming these ranch dogs as relatives as they greeted her soaking wet from their swim in the family pool. Notice all three faces and how Meg passes her white face snip marking down. 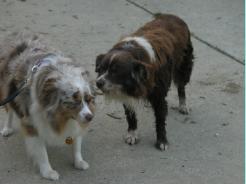 Molly meets her Grandma LasRocosa Meg and Meg says to her “I know you girls don’t like to hear what Grandmas have to say but sweetie you are Fat!” 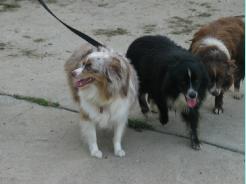 “3 generations at City Slickers Ranch…Molly, her father Samson and his mother LasRocosa Meg” 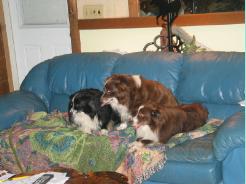 LasRocosa Meg between her TOY daughter Cubbie (left) and look-a-like son on the right Reagan. Cubbie is saying “Please Mom….I am old enough to bathe myself” 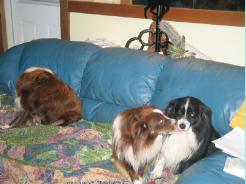 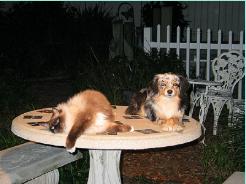